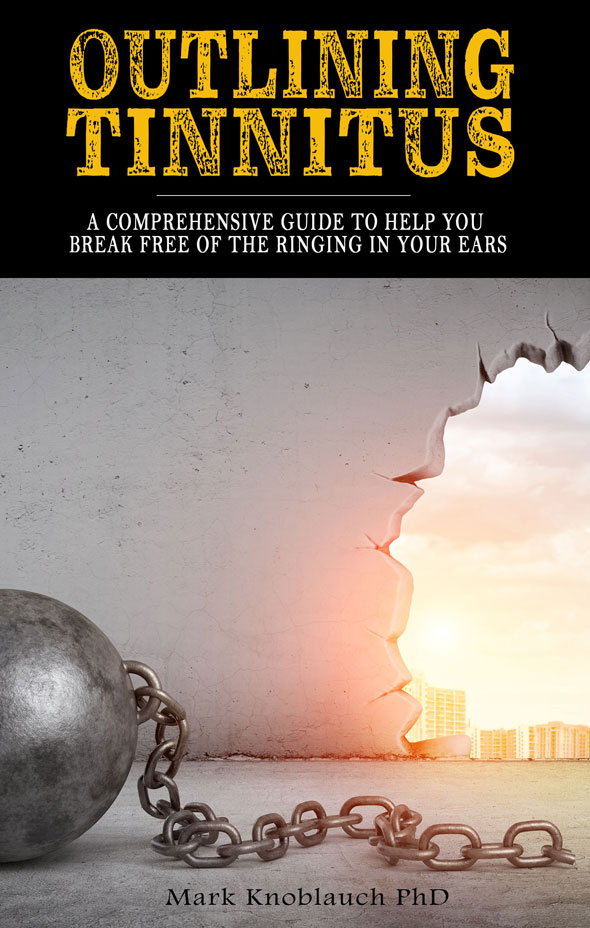 Outlining Tinnitus: A comprehensive guide to help you break free of the ringing in your ears

The underlying cause of tinnitus has been described by researchers as one of the most controversial issues in medical science.  Despite decades of intense research, the cure for tinnitus remains elusive.  Consequently, millions of tinnitus sufferers are left susceptible to the frustration and annoyance brought about by the ever-present ringing in their ears.

Mark Knoblauch has himself lived with tinnitus for over 15 years and understands the daily battles that often occur in those individuals afflicted with tinnitus.  He has been through the phases of avoiding quiet rooms, delaying bedtime, and seeking the sound of white noise in order to prevent the exasperation that is so common for someone feeling the effects of tinnitus.  Now, despite still living with tinnitus daily, the high-pitched sound in his ear has become nothing more than an afterthought thanks to a dedicated treatment plan.  And the success he had in addressing his own tinnitus drove him to write Outlining Tinnitus.

This book is designed to serve as an all-inclusive guide for those new patients who suffer from tinnitus as well as those who live with or know someone suffering.  Topics such as the involved anatomy, suspected causes, available therapies and treatments, and effects on quality of life are all discussed along with many others in order to provide a comprehensive overview of what tinnitus is as well as how it can be effectively eliminated.

Remember that tinnitus itself is not a true medical condition, but is rather a symptom of a separate underlying condition.  Therefore, the cause of tinnitus (e.g. hearing loss, acoustic neuroma, etc.) will likely be your ultimate diagnosis, with the ever-present tinnitus being a related symptom.    As such, upon contacting your doctor about your recently-discovered tinnitus you will probably be evaluated for several other medical conditions to determine the cause of the tinnitus (rather than simply confirming that you in fact have tinnitus).

In most cases, the initial medical consultation and a determination of tinnitus severity – coupled with an ear examination and assessment of hearing – will be adequate to address the patient’s tinnitus.  Certain indicators found during an initial exam such as a potential cause for the tinnitus or evidence of impairment from the tinnitus may warrant a more in-depth examination, and in some cases, such as tinnitus resulting from trauma or tinnitus accompanied by a sudden loss of hearing, immediate interaction may be required. Furthermore, tinnitus that presents with a psychological condition such as severe depression or suicide must also be addressed immediately.  It has been estimated that approximately one-third of patients with tinnitus will need a referral for further care in order to evaluate for a variety of other underlying medical conditions.

Surgery as a treatment option for the sole symptom of tinnitus does not exist.  However, several ear conditions exist for which surgery is an option, and those conditions may have tinnitus as an associated symptom.  When surgery is an option for these other medical conditions, tinnitus can be assessed post-surgery to determine if there was an improvement.  For example, tympanoplasty – reconstruction of the eardrum – has been reported to improve tinnitus and satisfaction in two-thirds of patients.  Conversely, shunt insertion and/or cutting of the vestibular nerve – both treatment options for Ménière’s disease – have been reported to have no effect on tinnitus.  Based on the available research, a patient should not expect an improvement in his or her tinnitus as a result of surgery for another inner-ear condition.

I highly recommend this book for any one suffering from tinnitus or knows someone who is. This book is well researched, written in a way that is easy to understand, and extremely informative. After reading Mark’s book, I now have the knowledge I needed to make great choices in my medical care and am encouraged that I too, can learn to live with this. This is a MUST READ!

This is a very well written book, making it an easy read. I read it all the day I received it, not wanting to put it down.  I was impressed with the list of 140 references at the end of the book that the author had used for citations, showing its scientific depth and giving the reader a chance to dig further, if desired. He simplified the technical and included the practical. He pinpointed details that matched my own experience, thereby validating them for me. I felt I had more tools to deal with Tinnitus after reading this book.

The author clearly understands the challenges of the condition and has written a well researched, comprehensive guide to help those that need information, support and hope. Chap. 8 is a great guide for those who live with T sufferer’s to bring a greater awareness of the challenges, stress and anxiety their loved one is facing 24/7.