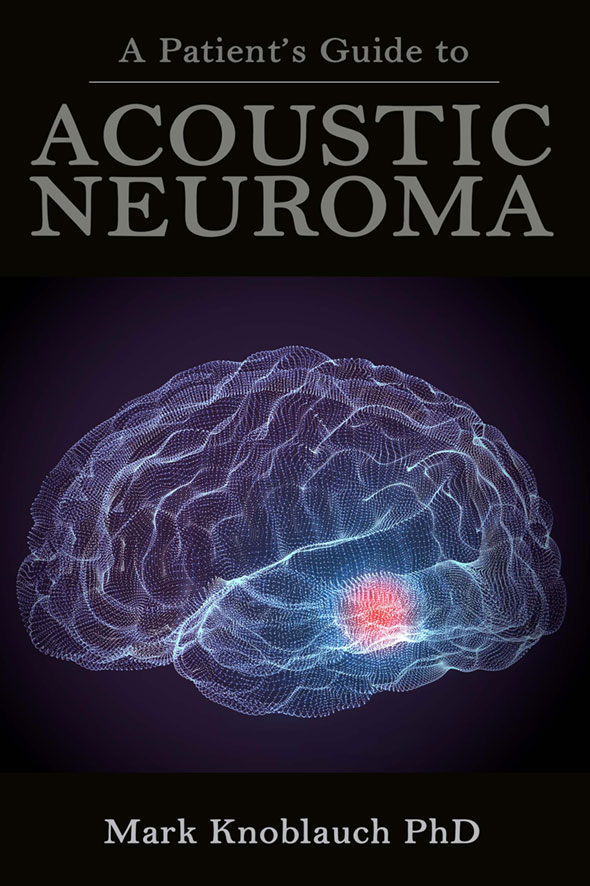 A Patient’s Guide to Acoustic Neuroma

Acoustic neuroma, or vestibular schwannoma, is a benign tumor originating from the vestibulocochlear nerve located deep within the skull.  Despite its benign nature, an acoustic neuroma can cause significant disruption to an affected patient’s life including slowly worsening degrees of imbalance, hearing loss, and tinnitus.  Thanks to significant advancements in medicine, acoustic neuroma patients are now afforded a variety of treatment options that include everything from monitoring the growth of the tumor to surgical removal.

A Patient’s Guide to Acoustic Neuroma is designed to serve as a comprehensive, practical reference guide for new patients diagnosed with acoustic neuroma.  In this book readers will find a detailed overview of the inner-ear structures affected by acoustic neuroma as well as a summary of the latest research into the suspected causes and relevant symptoms of acoustic neuroma.  In addition, the tools used in diagnosis of acoustic neuroma are outlined, along with details about the various treatment options available for patients and the resulting influence on a patient’s quality of life.

This book is designed to educate and empower those who are affected by acoustic neuroma.  To do this, over 150 citations highlight the most recent research in the field while also recognizing the broad extent of research into acoustic neuroma that has been acquired over the past century.  In doing so, patients can be armed with the most relevant information that can then be used to have informed and productive discussions with their medical provider.

The length of time that symptoms exist prior to being diagnosed with acoustic neuroma has been reported to average around 18 months, though there can be quite a wide range in this timeframe.  No matter the length of time an individual has exhibited symptoms, it must be pointed out that treating the symptoms directly will most likely have no effect, as acoustic neuroma symptoms tend to maintain a presence despite directed treatment.  Therefore, symptom relief should be largely focused on treatment of the acoustic neuroma (i.e. the cause of the symptoms) rather than treating specific symptoms.

There are no specific criteria outlining the use of radiosurgery, though many professionals prefer to utilize it on acoustic neuromas less than 3cm wide.  Smaller tumors, those tumors that have arisen after surgery, or neuromas that occur in the elderly are also generally considered as favorable for radiosurgery whereas larger tumors are typically scheduled for traditional surgery.  However, in modern times – where very small tumors are often discovered – individuals are more often being recommended for observation as opposed to radiosurgery treatment.

As mentioned earlier, the PANQOL survey was developed specifically for acoustic neuroma patients.  Researchers found that patients who underwent surgery scored highest on the survey in what they called ‘general’ quality of life but scored lower in aspects such as hearing, facial nerve function, pain, and energy than both conservative and radiosurgery patients.  However, patients who underwent either stereotactic radiosurgery or surgery reported more similar – but lower overall – quality of life scores than those who underwent conservative treatment.

A timely, concise and comprehensive guide for the Acoustic Neuroma patient. Whether, they are newly diagnosed, on watch and wait (6 or 12 month MRI monitoring ) , pre and or post treatment, that is either surgical and or radiation, will find very useful information to help them understand the condition of having an Acoustic Neuroma.

This book delved into the history of acoustic neuromas. The author also compiled information about causes, symptoms, and treatments available.